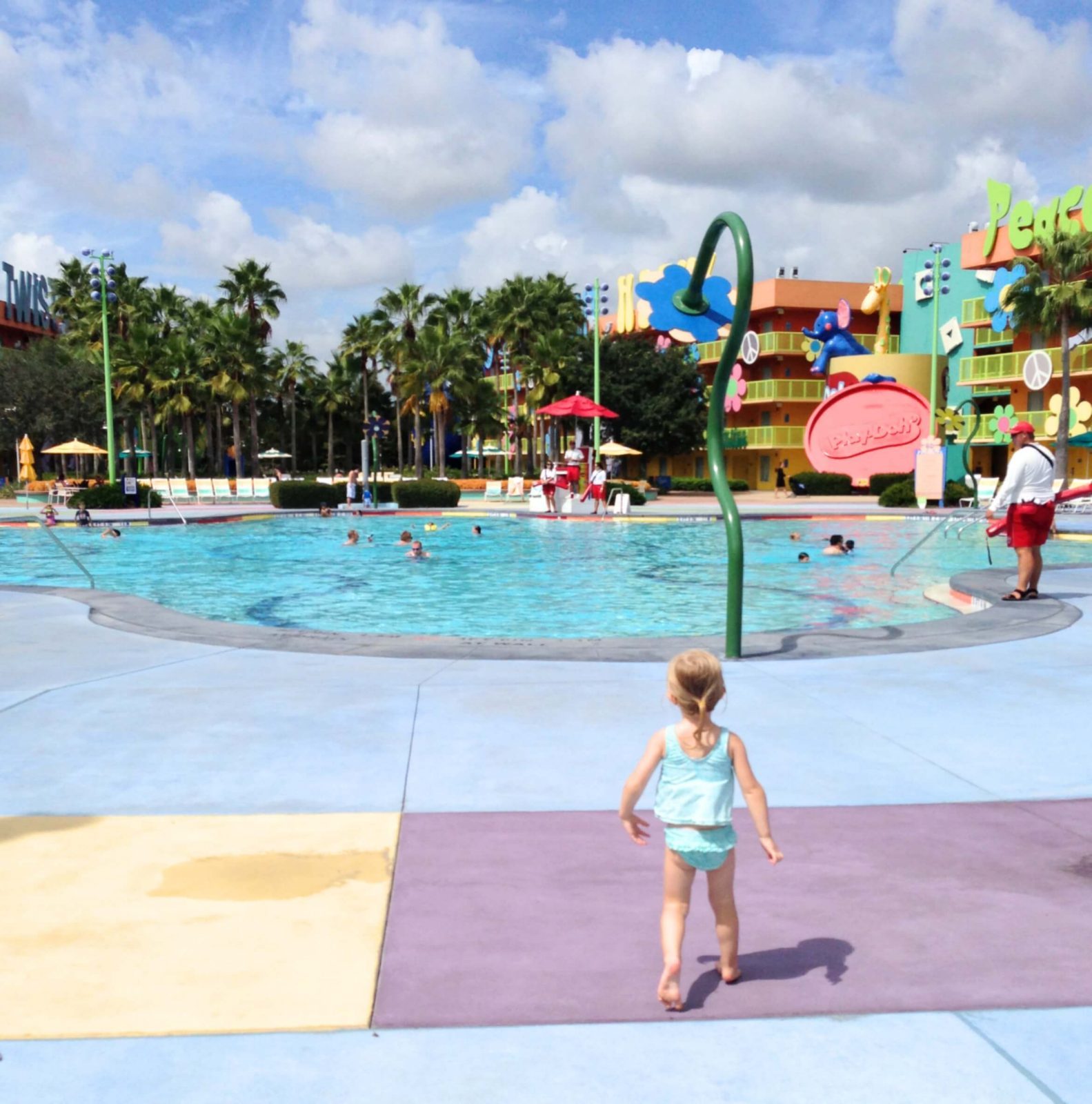 Today I’m sharing my Disney Pop Century review with a focus on what you get for your money when staying there.

Value resorts are the most affordable and the most basic in terms of amenities and Pop Century is arguably the most popular Disney Value resort.

Is Pop Century actually a good value for the money? Read on to find out what I think! 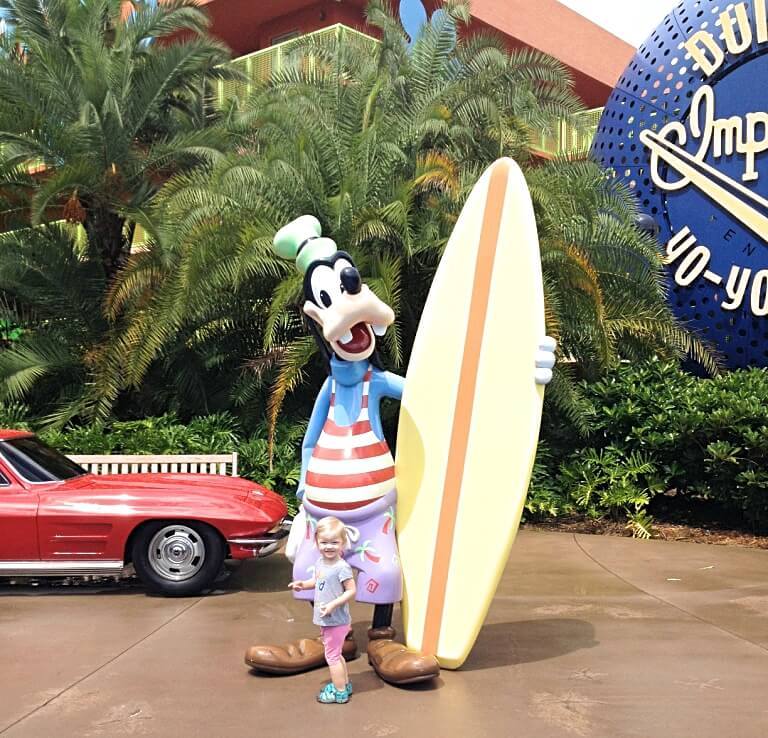 What you will pay for a room at the Pop Century Resort varies greatly depending on what time of year you visit.

The most affordable months of the year are January, February, August, and September.

But it is only slightly more to visit at other, more desirable times of the year. Here’s a chart of what rooms cost at Pop Century during 2022 from MouseSavers.com (tax is already included in these prices).

But keep in mind that you can almost always get a discount off of these “rack rates”. Disney offers room discounts year-round, from 15-35% off.

The rooms at Pop Century got a complete overhaul in 2018.

The new rooms are completely different from the old ones! 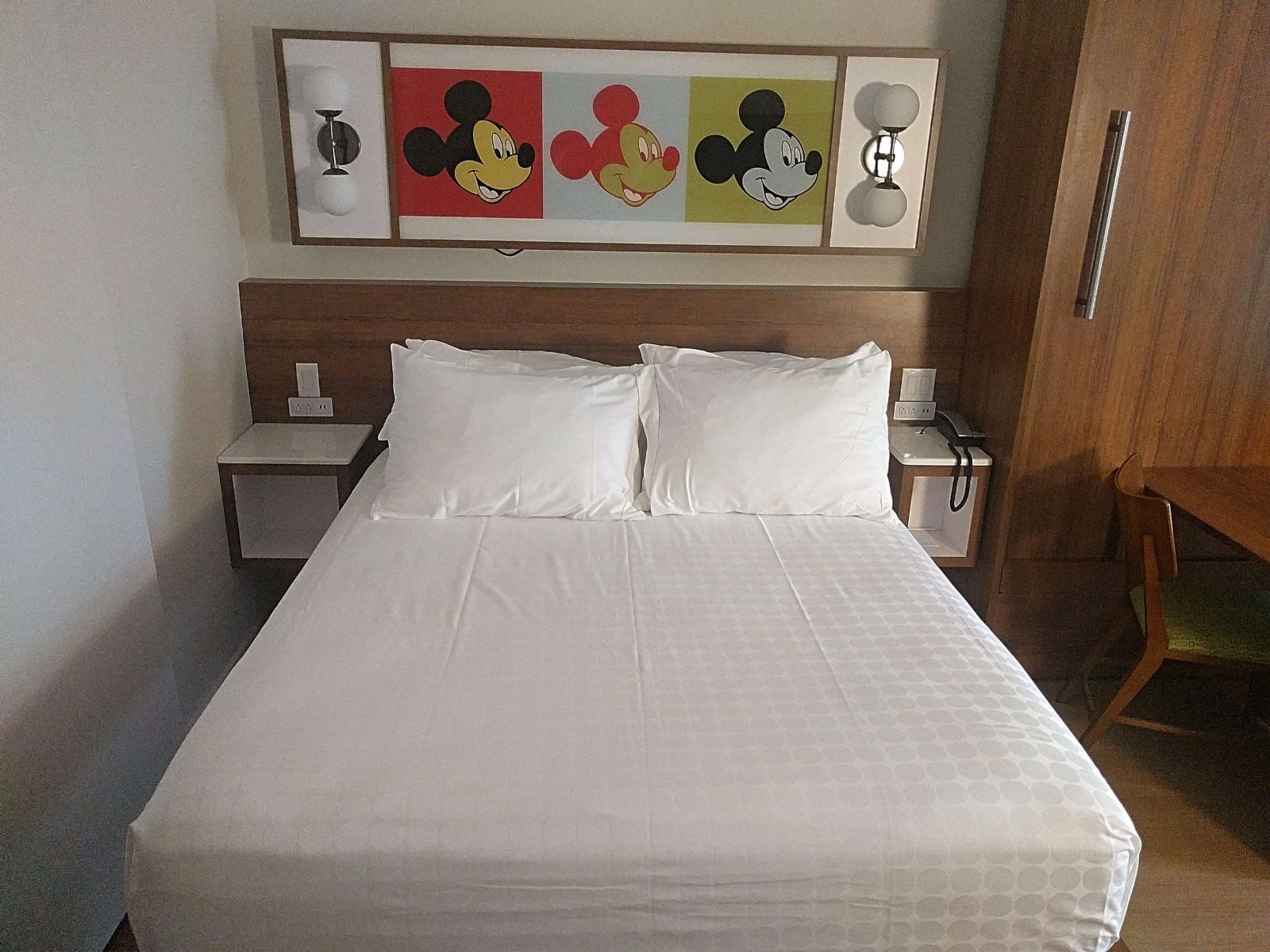 The double beds have been replaced by two queens (one stored in the Murphy Bed unit) and there are MANY new features (such as in-room coffee makers, a wooden door to separate the bathroom from the main room, and a giant TV).

Check out my photo tour of the new rooms at Pop Century here. 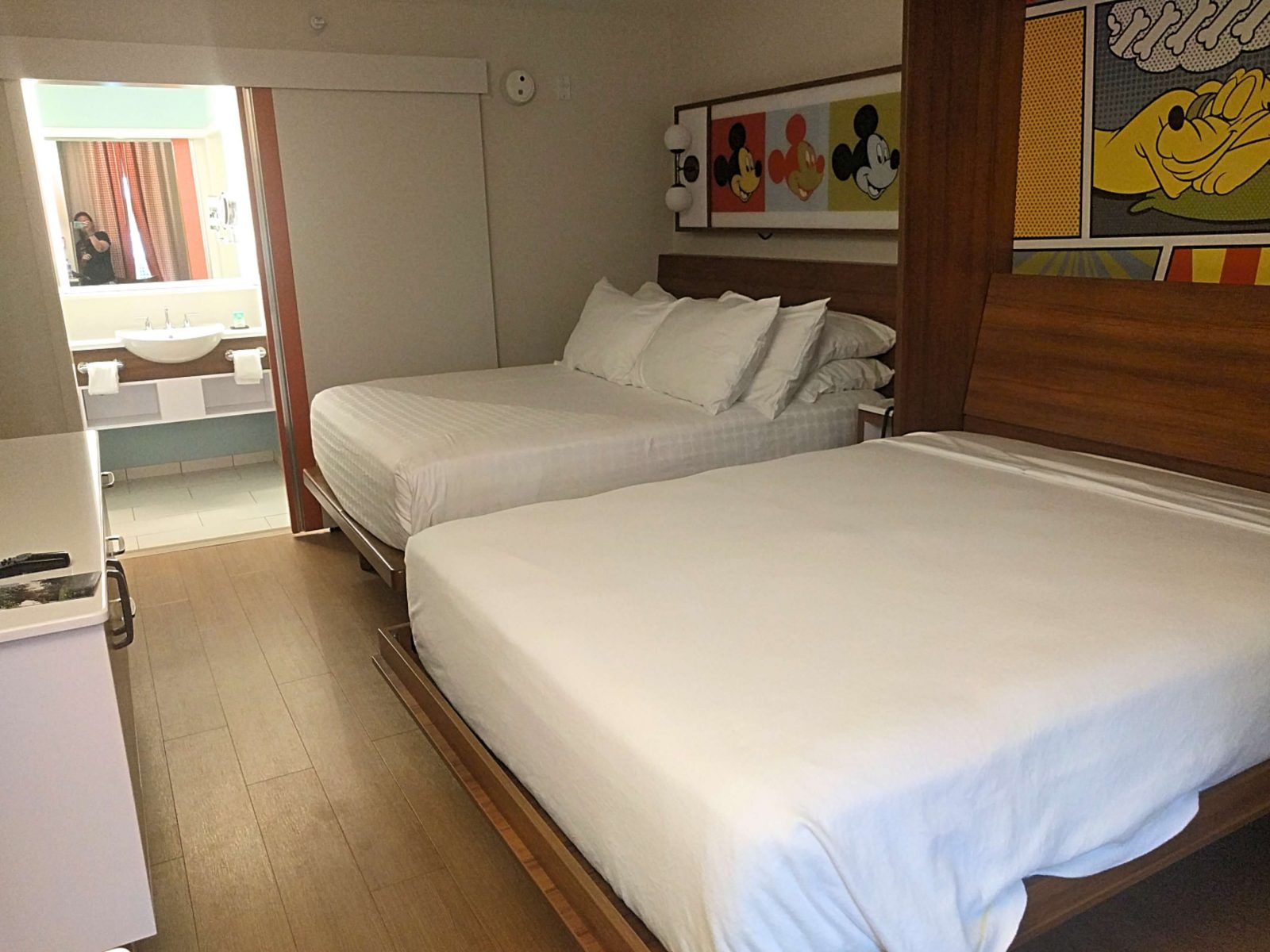 I personally think the rooms at Pop Century are great – clean, modern, spacious enough, with nice features and a few special Disney touches.

The rooms are small (260 square feet) but have everything you’d expect: a flat-screen TV, mini-fridge, dresser with drawers, coffeemaker, iron and ironing board, hairdryer, phone, and toiletries.

The fridge does NOT have a freezer section and there is no microwave in the room. 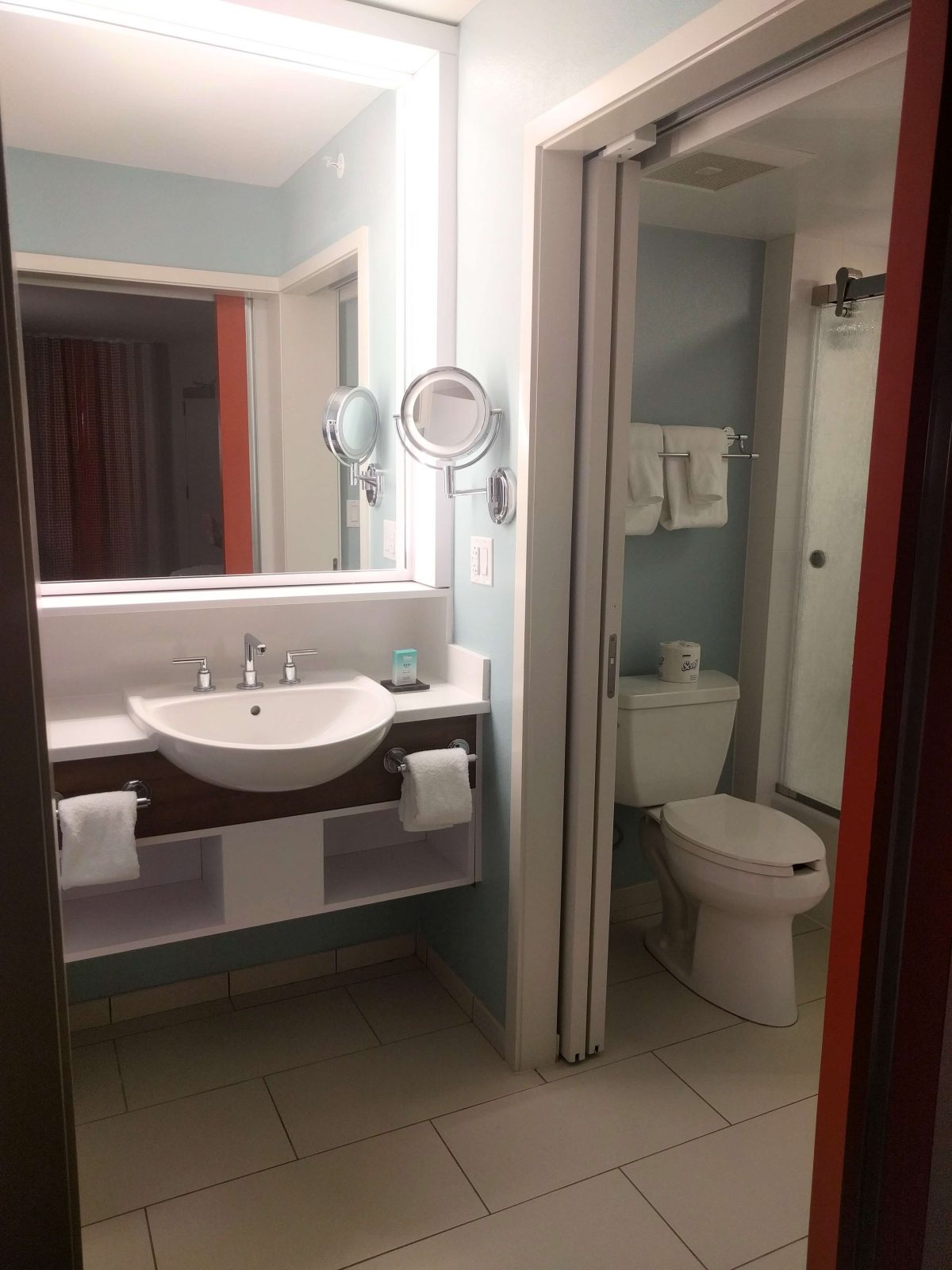 The bathroom is a split design with the sink separated from the toilet/tub with a sliding pocket door.

Overall I feel that the room is a great value for the money. I think it is at least on par with what you would get for the same price elsewhere in the world, if not a cut above.

If you want to see how Pop Century stacks up against the other Value resorts, check out my pick for the best Value resort at Disney World in this post! Disney provides complimentary transportation within the Walt Disney World resort. Buses constantly run to and from the theme parks to Pop Century.

Bus transportation at Pop Century is especially fast because the buses go directly to the parks from the hotel – you won’t stop at any other resort to pick up passengers.

This isn’t the case at many other Disney resorts (including some Deluxe resorts) so it is a nice perk of staying at Pop Century. 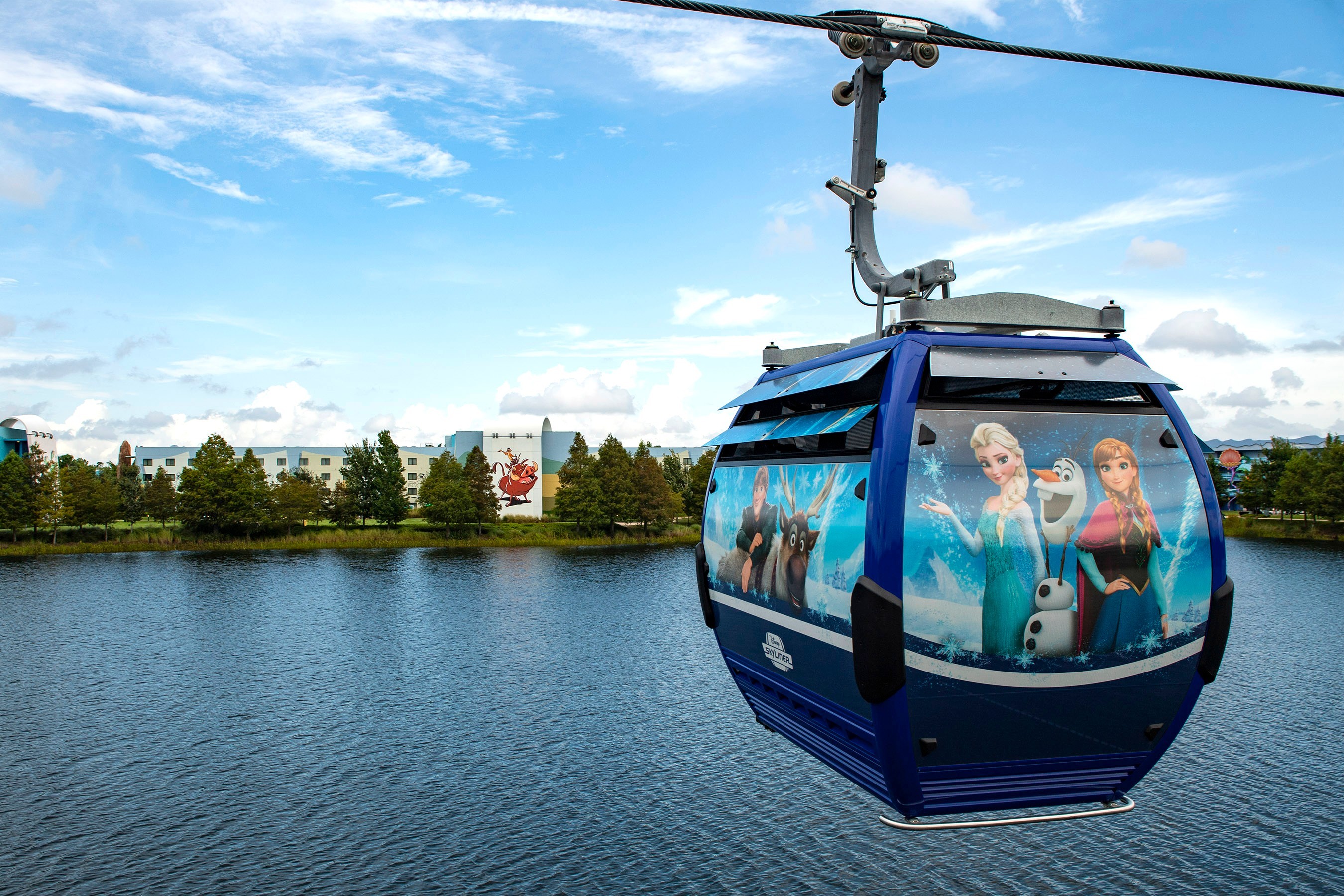 Pop Century also has a stop on the new Disney Skyliner gondola system which can take you to Epcot (the back entrance in World Showcase) and Hollywood Studios.

The Skyliner stop is shared with Art of Animation on the bridge that connects the two resorts.

To get to either of the parks, you first have to take the Skyliner to the Caribbean Beach Station and get off. Then you have to reboard a gondola that is going to either Hollywood Studios or Epcot.

The approximate travel time to Hollywood Studios via the Skyliner (allowing for transfer time) is 12 minutes.

The approximate travel time to Epcot via the Skyliner is 17 minutes.

Though the Skyliner will likely be a faster way to get to Hollywood Studios, it may be quicker to bus to Epcot.

But if you are heading to Epcot’s World Showcase, then the Skyliner will drop you off right there and save you about 15 minutes of trekking through the park! You might be surprised at the amenities you’ll get for the price tag at the Disney Value Resorts.

If you want to know what to expect at the Value resorts in general, check out this post.

In the main building (Classic Hall) you will find the check-in and concierge desk, food court, gift shop, and arcade. They are all clean and modern looking with a fun retro look. Everything POP shopping and dining at Pop Century resort

I have found the food from the food court to be fresh, tasty, and a good value for the money. Here is the current menu from AllEars.net. The only warning I will give about the food court is that it can get scarily crowded from roughly 8:00 – 9:30 am each morning.

I would avoid it if possible during this time! Everyone is in a hurry to eat and get to the parks and it is chaotic and not at all fun. disney character statue of tramp from lady and the tramp

Each Disney resort has a “theme”, and Pop Century’s theme is American pop culture of the second half of the twentieth century.

The buildings of the resort are grouped by decades and the decor reflects the fads and entertainment trends of that decade.

We stayed in the 1950s area and my daughter really enjoyed the giant Lady and the Tramp statues. Next in my Disney Pop Century review we’ll check out the pools.

Pools are a big attraction at all of the Disney resorts and Pop Century is no exception. 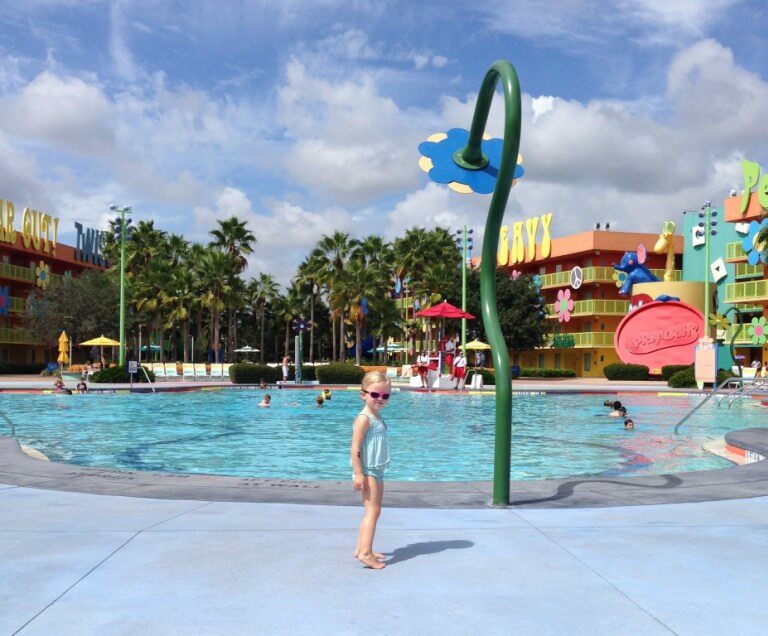 There is a large flower-shaped feature pool close to the main building, a zero-entry kiddie pool with bubblers, and a pool bar that serves up tasty alcoholic drinks.

On this last trip, we thought the pool was warm and very clean. Every afternoon there is a pool party at the main pool with games and activities led by the pool staff.

Each night there is a Disney movie shown pool-side on a giant inflatable screen. It’s a nice way to spend an evening if you aren’t in the parks. There are two other pools around the resort as well. There is a nice-sized playground close to the main building along with a water play area with my main man, Goofy.

My daughter liked the playground a lot and we had a fun photo op with Goofy. Path we walked to get to our room

It is also worth noting how lush the grounds are at Pop Century.

The landscaping at Disney is outstanding, and even at a Value resort, you will find flowers, bushes, and trees lining the paths that wind around the resort. You don’t feel like you are in a concrete jungle like you might at other hotels. 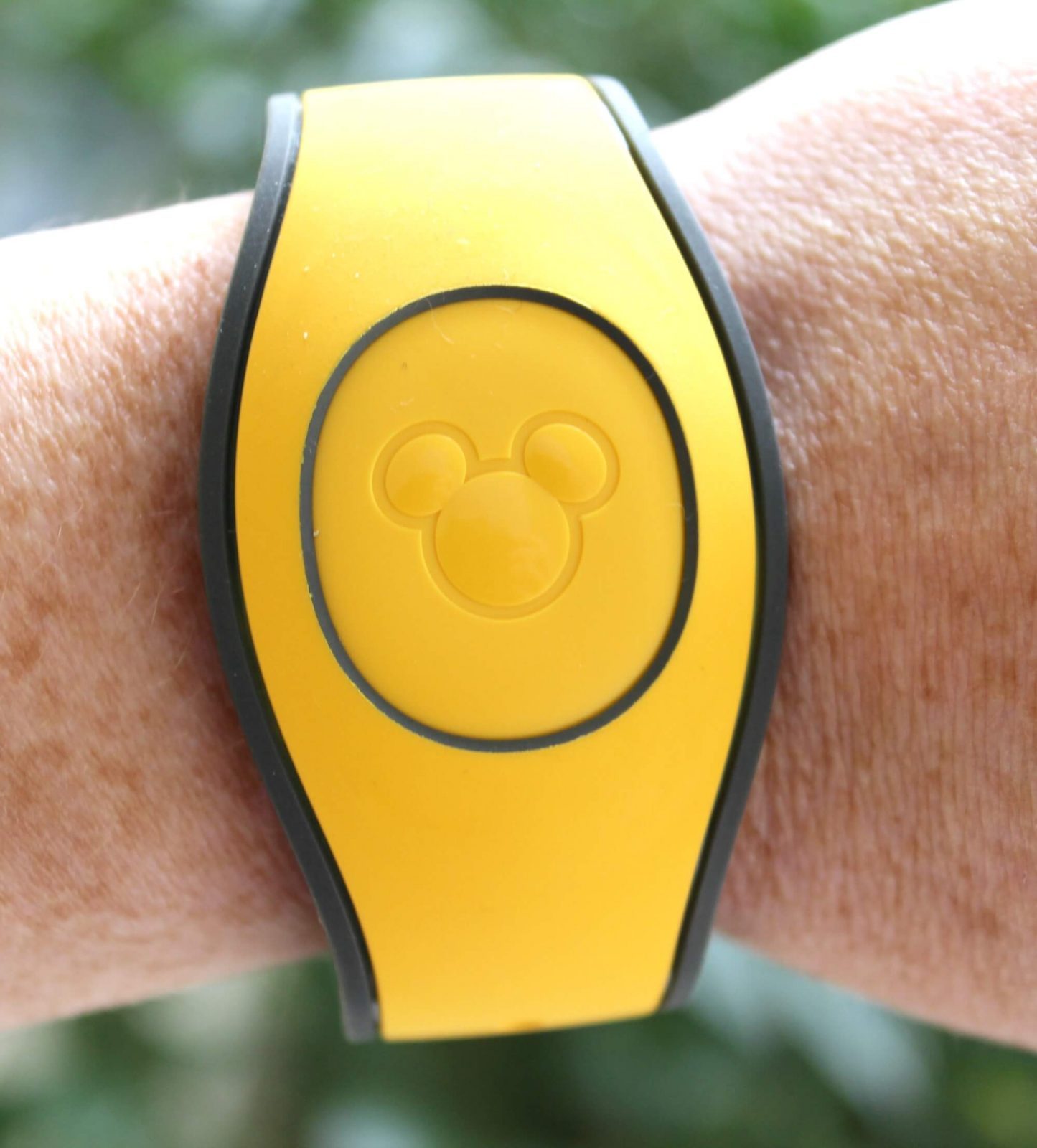 Staying at Disney World resort means you can use Magic Bands to their full potential – including opening your room door and charging purchases back to your room.

Guests at all Disney resorts have access to “Early Theme Park Entry”. Every day, every theme park opens a half-hour early just for Disney resort guests.

If you can get up, it’s a great way to beat the crowds to the parks! To summarize, we got the following with our room at Pop Century:

I think it goes without saying that I find Pop Century to be an excellent value for the money spent!

I am frugal and careful about spending a lot of money on a vacation but I feel that a stay at Pop Century is a total bargain.

What do you think of this Disney Pop Century review? Have you stayed there or would you? Please leave a comment below or join the discussion in my private Facebook group called The Budget Mouse! Disney World Free Dining: Everything You Need To Know - The Budget Mouse

[…] First let’s take a family of four, with kids ages 7 and 10, staying in a standard view room at Disney’s Pop Century resort (you can read my full review of the resort here). […]

[…] Overall, the room has a clean and mid-century modern look which I appreciate but others think looks too sterile for Disney. What do you think about the aesthetic of the refurbished rooms? Leave a comment below or join the discussion in The Budget Mouse Facebook group. You can check out my full review of Pop Century Resort here. […]

[…] If you’re on a budget and wondering how nice Disney’s POP Century resort actually is, Leah from The Frugal South put together a fantastic review, which you can read here! […]

we have stayed twice at all stars and twice at pop century, all stars were very nice but pop century just has that little some thing different to it. really enjoyed it. this year we splurged and we are headed to port orleans french quarter. we just feel appreciated when we are at disney world and they do what ever is reasonable to make you happy

I agree, Nancy, Disney hospitality is why I keep going back. French Quarter is my favorite moderate resort and it got even better with the food court refurbishment last year. You'll love it there!