Here’s my Akershus Royal Banquet Hall review of dinner with the princesses in Epcot’s Norway pavilion! So get ready for lots of cuteness and some not-so-weird Norwegian food. Akershus is the only table service restaurant in the Norway pavilion in Disney World’s Epcot. It is also one of the only places to dine with the princesses, the other locations being Cinderella’s Royal Table in the Magic Kingdom, Trattoria al Forno at the Boardwalk, and 1900 Park Fare in the Grand Floridian Resort.

Breakfast, lunch, and dinner are all served here. It is a very popular location so reservations are definitely recommended – I would suggest getting one at the 180-day window if at all possible! First, you will check in at this podium and you may be given a buzzer. We were right on time for our fairly early 5 pm dinner reservation and we were escorted right in.

Next, you will have a chance to have a group picture taken with a princess – ours was with Belle, which I think is the norm here. I was fumbling with my camera and getting my Magic Band scanned so, unfortunately, I didn’t get a picture. The restaurant isn’t huge and definitely has a royal feel thanks to the chandeliers, banners and wall decorations. We were seated quickly and greeted by our server soon thereafter. All of the servers are natives of Norway and it is so much fun to ask them questions about the food and their culture. While the food is great, without a doubt the princesses are the main attraction here. This was the first time my two-and-a-half-year-old daughter had met them (with the exception of Cinderella) and she was familiar with all of them from books and movies before we went. She was completely amazed that they were all here in one place! The princesses started visiting our table about 30 minutes after we were seated. There were four circulating around the restaurant: Aurora, Snow White, Ariel, and Cinderella. These change often and may also include Jasmine, Mulan, or Mary Poppins. They were all SO sweet with my little one and I loved that they got down to her level to talk with her and hug her. Gathering for the princess processional

At one point later in the meal, music sounded and it was announced that the “princess processional” would be starting shortly. All of the little ones gathered around the nearest princess who led them around the entire restaurant in a little parade.

When my little one disappeared around the corner with Ariel, I wasn’t sure how this would go (she was only two after all!). But she reappeared a few minutes later, all smiles and practically floating on air. 🙂 A kiss from Cinderella on her cheek

While she pranced around the table a few minutes later, my server asked if I was enjoying myself and I said I would never forget this and started getting all weepy. I was feeling so grateful that I got to share this time with my daughter while she was so little and sweet! This is Disney magic at it’s best.

The approach at Akershus is unique – the first course is an appetizer buffet, then you select an entree off of the menu, and dessert is served family style at the table.

This clearly aims to please everyone, and I loved all of the options. After our server took our drink orders we were invited to visit the appetizer buffet. I started with salad and my daughter had some bread and fresh fruit (which I didn’t get a picture of). Then I tried some of the Scandinavian seafood on the buffet, including delicious smoked salmon and seafood salads. There was also a selection of meats, cheeses, and some other cold salads. Everything I tried was excellent. I especially like a Norwegian specialty called Gjetost, which is a brownish cheese that is slightly sweet. I loved being able to try some different food without having to commit to an entire meal! 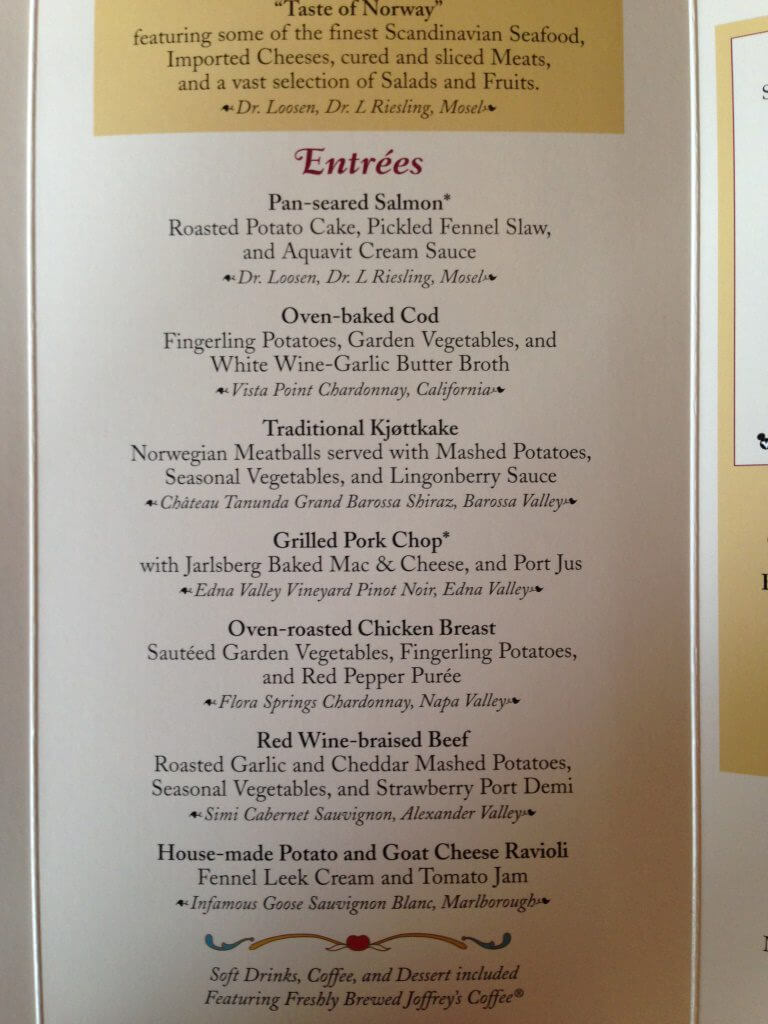 All of the entrees on the menu sounded tasty which made it really hard to choose. I am a seafood lover so I went with the Oven-baked Cod with Fingerling Potatoes and Garden Vegetables in a White Wine-Garlic Butter Broth. The menu changes often, so check here for the most up-to-date menu. My fish was outstanding. It wasn’t overcooked and the sauce was delish. I was glad I didn’t get too full from the appetizers so I could eat it all! I enjoyed a glass of Savignon Blanc with it, which complemented the dish perfectly.

Many folks don’t know that you can get another entree if you don’t like your first one or want to try something different since this is an all-you-care-to-enjoy restaurant. So don’t be afraid to be adventurous here! My daughter chose the beef with rice and veggies from the kid’s menu. Other options were meatballs, pizza, macaroni and cheese, chicken and salmon. I tried some of her beef and it was tender and flavorful – I highly recommend it. She was so in awe of the visiting princesses that she didn’t eat much. Look at that face! Our server brought us this lovely plate of desserts to finish up our meal. It included traditional Norwegian rice cream topped with strawberry sauce, apple cake with cardamom whipped cream, and chocolate mousse.

They were all excellent and offered nice variety. I especially like the mousse and my daughter loved the rice cream. I had a cup of coffee with dessert since a non-alcoholic beverage is included with the meal. Dinner at Akershus isn’t a cheap affair. As you can see from the receipt above, an adult meal here was $53.24. This was several years ago and prices have since increased to between $56 – $65 depending on the season. Since my daughter was under three, her meal was free. Children’s meals are around $25 here. There are not many dining experiences that I will remember for the rest of my life, even at Disney World. But the memories I have of our dinner at Akershus Royal Banquet Hall are so precious that I hope to have them for a lifetime.

I hope this Akershus Royal Banquet Hall review helped you know what to expect and answered your questions. Have you dined at Akershus or do you want to? Please leave a comment below!

Okay I had this place on my radar and now i'm definitely going to try to get a reservation when I can! I'm going to get the dining plan so my biggest question is, do you just tip as you normally would? I used to work in the restaurant business so I want to make sure I take care of the servers!

Hi Chelsea! Yep, there will be a recommended tip amount printed on your receipt to help you calculate, but an 18-20% tip is the norm. The servers actually do take your orders and serve your food here. Have fun!

I absolutely loved your review! I am taking my 2.5 year old grand daughter in January and was a littke hesitant but after reading this I am super excited!

Thank you so much, Kate! You will love it - have your camera ready and be warned that you might cry ;)

This was extremely helpful for me as I was trying to figure out if we should go for the meal plan, or a character dining experience on our upcoming trip to Disney (my girls, ages 5 & 7 first time!) We will definitely be partaking in this! Thanks for this awesome blog!!

Thanks so much for reading, Ashley! I think your girls would have an incredible time at Akershus. :)

Hi. Just recently discovered your blog and have enjoyed what I've read so far. I'm curious about the fact that you didn't pay for your daughter's meal because she was under 3. I thought the children under 3 were able to share a meal with you or eat off a buffet but when it came to ordering a meal off the menu you had to pay for the meal. Can you please explain this? Thanks

Hi Rena! Akershus is one of the few "All-You-Care-To-Enjoy" dining experiences at Disney that is not a buffet. These locations allow you to order an item off of the kid's menu (for free) for your kiddo under three! I first learned about this when dining at the Garden Grill the year before and it surprised me, too. At other table service and quick service locations you DO have to pay extra if you want to order something additional for your 1 or 2 year-old, but at All-You-Care-To-Enjoy locations that have a kid's menu they will let you get something for your kiddo for free. Hope that makes sense and thanks so much for reading!